Protect Your Family from Radon: St. Croix County is offering radon testing kits. Short term test kits can be purchased for $10 from St. Croix County Public Health. All testing and lab fees are included in cost of the kit. Kits are available at: St. Croix County Government Center - 1101 Carmichael Rd, Hudson WI St. Croix County Services Center -  1752 Dorset Ln, New Richmond WI Radon exposure is the second leading cause of lung cancer nation-wide, causing about 21,000 deaths per year in the U.S. and about 500 deaths per year in Wisconsin. Radon has no smell, taste, or color. While you can't see or smell it, you can protect yourself from radon. It can be easily measured with a simple and inexpensive test that homeowners can do themselves. The full press release can be found on the St. Croix County website: https://www.sccwi.gov/CivicAlerts.aspx?AID=212

The glaciers that sculpted areas in the Township left deposits of sand and gravel called glacial moraines. The layers of sandstone covered by the glaciers can be seen in the cliffs along the Apple and St. Croix Rivers. Over time either the Anishinabeg or the Dakota lived here but finally established the land east and north of the St. Croix for the Anishinabeg and west of the Mississippi for the Dakota.

Rivers - Highways for Explorers, Fur Traders, Lumbermen: Historians suggest two origins for the name St. Croix (Holy Cross): either for the natural stone cross in the rocks at St. Croix Falls or in honor of an explorer, Mons St. Croix, who was buried near the mouth of the river at Prescott. In 1680 explorer Daniel Greysolon, Sieur DuLhut, passed the Somerset area as he traveled the Brule-St. Croix river route from Lake Superior in his search for a water route to the Pacific. Fur traders, many of them French-Canadians, made good use of this route. In the early 1800’s lumbering activity increased and in 1839 the first saw mill on the St. Croix was built at Marine-on-the-St. Croix.

In 1850 brothers Joseph and Louis Parent from French-speaking Canada came up the St. Croix looking for a good place to homestead. They settled on the bluffs above the mouth of the Apple River. They found potatoes grew well here and named the spot “La Pointe de la Pomme de Terre” (“Pointe” for the river junction and “Pomme de Terre” (apples of the earth) for the potatoes). Many of their family and neighbors soon followed from Canada, settling on both the north and south sides of the Apple River.

General Sam Harriman named Somerset: Samuel and Hud Harriman, brothers born in Maine of English parents, came to the Apple River in 1856 to found a mill, store and logging empire. The area closest to the St. Croix River was already settled. They ventured upstream locating their dam for a mill where Main Street crosses the Apple River today. They also built a general store and platted streets and lots for a village they named Somerset. It is thought Somerset was for their father’s birthplace, Somerset County, England. Sam served as a general in the Civil War from 1862 to 1865. After the war he pursued many business interests including developing Harriman’s Landing on the St. Croix (thus “Landing Hill” on Hwy 35/64) to bring people and goods to Somerset. He was also instrumental in bringing the railroad through the county and into northwestern Wisconsin.

From Territory to Township: When the Wisconsin Territory was established in 1840, St. Croix County extended from Lake Superior to the Mississippi where St. Paul and Minneapolis now are and Dakotah (now Stillwater) was the county seat. In 1848 Wisconsin became a state with the St. Croix River its western border. St. Croix County went from above Danbury to below Prescott and the county seat was moved to Buena Vista (now Hudson). The current, smaller county boundaries were set in 1853. By 1856 Somerset residents wanted to locally manage roads, schools, and boundary disputes and made a formal request to the county for township status. The County agreed and in Nov. 1856 the first official meeting was held. The Town Hall was built in 1886 by Harriman’s nephew, Edward E. Mason.

Churches: Priests and ministers visiting Somerset would hold mass in a settler’s home. Already by 1856 the Catholic population had outgrown the farmhouses. Somerset’s first church, St Vincent de Paul, was built on a 5-acre parcel donated by Francois Parent. The small church overlooked the two rivers. In order to be more centrally located the congregation built the Church of St. Anne across the river from the Village in 1874-75. The original building was torn down in 1916 to make way for the present church designed by E.L. Masqueray, architect for the St. Paul Cathedral and Minneapolis Basilica. The Christ Lutheran congregation was formed by primarily German settlers in 1896. Their first church was built about two miles southwest of the Village in 1899. Fire destroyed this building in 1917 and the following year they built a new church on the south side of the Village. The congregation moved to the north end of the Village in the early 1970’s. The Emmanuel Lutheran congregation formed in May of 1894 and built a church that fall on the southwest side of the Township.

Bridges & Roads: Somerset’s two earliest bridges across the Apple River were made of wood. One was a foot bridge near the St. Croix River. The other for commerce was in the Village south of the present Main Street bridge. The road between these two bridges was the first to be maintained by the Township. The village bridge was rebuilt in 1861 and again in 1893. A new Township bridge was built close to the falls in 1882. The five-span steel arch Soo Line Railroad “High Bridge” over the St. Croix River, completed in 1911, was for many years the largest of its kind in the world. It is listed on the Wisconsin National Register of Historic Places. 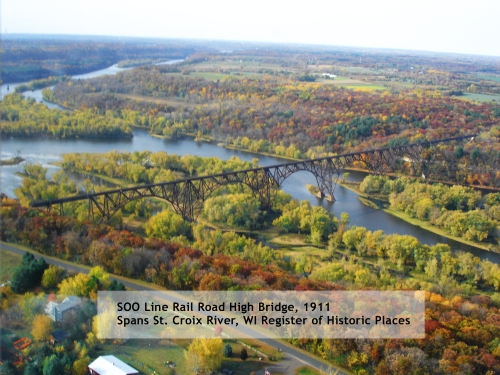 Schools: The first Somerset teacher was Mrs. Julia (Francois) Roi, who taught classes in the Audette home near the Apple River falls starting about 1858. A few years later a small school was built not far from the St. Vincent de Paul church. A bigger building, the Apple River Falls school was built in 1909 along the road to the falls. Other rural schools: Lakeside (1876), Sand Hill (1876), Landing Hill (1886), Pine Lake (1897), North Bass Lake (1914), and Horse Collar (1938). In the Village classes were held in homes for two years until the first school was built in 1864 on Spring Street. About 1890 a new Village school for grades one to eight was built several blocks north. In 1917 grades nine and ten were added. The first parish school opened in the fall of 1890. The Sisters of St. Joseph of Concordia, Kansas came to teach about forty students in the two-room frame building. In 1907 a three-story brick building was built to house both the school and the sisters. The Sisters of St. Joseph at Crookston, Minnesota came in 1909 to teach the school’s then 185 students.

John Till, the Plaster Doctor: From 1905 to 1908 hundreds came every day to the Octave Cloutier home in Somerset seeking to have their health problems cured by John Till, an Austrian immigrant. His secret salve drew infection out of wounds and his plaster produced very painful blisters that drew poisons out of the body. Till also treated with internal medicines and was skilled at setting broken bones. This was a very busy time for the Cloutier family where Till lived rent free and Octave was his assistant. It was also a time when Somerset rig drivers, stores, hotels and restaurants made good money serving the visitors. Till had no set fee but was reputed to have made good money from what people paid him. A song was even published about Till in 1907. He was a memorable personality who wore gold earrings, sometimes went barefoot but had a sincere way of helping the sick. He was put on trial many times for practicing medicine without a license but was never convicted while in Somerset. After taking the Cloutier family to Austria in 1908, Till built a large clinic in Turtle Lake that people flocked to. In 1919 he was sentenced to six months in jail in Barron, Wis. Somerset businessman A.J. Vanasse so impressed Gov. Blaine by gathering 6,500 signatures on a petition for his release that the Gov. authorized Till’s early release. In 1922 the court forced Till to leave the country. He went back to Austria but returned in 1946 after World War II, settling near Hudson, and died in 1947.